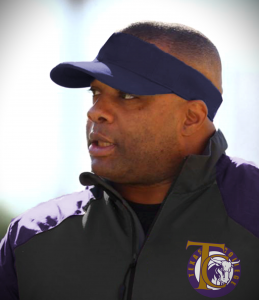 May 6, 2022 – Texas College is pleased to announce that Jarrail Jackson has been named Head Football Coach for the Steers. Jackson, a former University of Oklahoma receiver and returner standout, brings a wealth of energy and experience to the College, both as a coach and player.

Most recently serving as Tyler Junior College’s Offensive Coordinator, his 17-year professional career has spanned a multitude of roles with various teams at the professional, collegiate, and secondary level. Notably inclusive of the aforementioned are the XFL’s Dallas Renegades, the Arizona Cardinals, the Miami Dolphins, Dartmouth College, Washington State, and Mississippi State, just to name a few. Now, Coach Jackson has been handed the reigns to the Steer Football program in preparation of the 2022 season.

As no stranger to Tyler and East Texas, Coach Jackson’s well-established rapport within the region and beyond positions Texas College for an exciting future. Well-known and respected for his ability to recruit, accompanied with his breadth of professional experiences, of which has situated him alongside coaching legends such as Bob Stoops and Hal Mumme, the father of the “air raid” offense, the naming of Coach Jackson as the Steers’ Head Football Coach will undoubtedly serve as a benefit to the campus both on and off the field.

“We are glad to have Mr. Jackson join us as our new Head Coach,” commented Dr. Dwight Fennell, President of Texas College. “We look forward to his leadership and moving the Steer Football program in a new direction.”

In addition to his notable professional tenure, Coach Jackson’s career as a player is likewise impressive. Originally a Houston native, Coach Jackson played football at Houston Yates High School and continued his student-athlete career as an Oklahoma Sooner, where he earned First Team All-Big 12 honors as a receiver and kick returner. Memorably, Jackson is noted for returning a punt for a touchdown in the 1996 Texas-OU game, which sparked the Sooners to a 30-27 overtime victory over the Longhorns. As a senior in Bob Stoops’ first year at Oklahoma, in which Mike Leach as offensive coordinator, Jackson caught 44 passes for a team-leading 572 yards and a team-high six touchdowns. Following his collegiate career, Jackson spent two years with the Buffalo Bills and also played several arena football league seasons. Coach Jackson holds the Bachelor of Arts degree from the University of Oklahoma in Norman, Oklahoma.