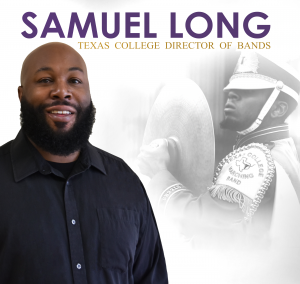 Texas College is pleased to announce that Samuel W. Long, Jr. has been named Director of Bands. Long brings a wealth of experience to the Texas College Band, with a tenure of service as a band director that spans nearly two decades.

Most recently, Long served as Director of Bands and Fine Arts Director for Royal High School in Brookshire, Texas. Under his tutelage, the Royal High School Band amassed a multitude of awards and accolades, many of which tout first place recognition. Throughout his 18-year tenure, Long has consistently proven himself as a leader committed not only to growing and enhancing his program, but congruently  committed to the success of each student-musician.

Imparting his knowledge and skills as a musician, Long aims to provide all students with positive classroom experiences that will help develop them into influential musicians. Through consistent hard work, rehearsal, and practice, students will be prepared for any and all performances. Chiefly, Long emphasizes his preparation  tactics as those of the highest level to allow students to continue their musical journey beyond graduation in a multitude of avenues.